Over the weekend I watched a series of ice skating competitions, short and long programs of individual skaters, ice dancing teams, pair skating, and finally a gala show of performance events, the rules and requirements no longer the issue, but the artistry, beauty, grace and majesty of the skaters brought into focus.
Awesome, indeed, these gyrations, death spirals, gravity-defying throws, swizzles and twizzles, throw jumps, overhead lifts, lutz jumps, layback spins and breath-taking catches in mid-air. Not rocket science? I think perhaps it is, the enormity of remembering to execute a thousand choreographed steps with perfect timing, to do this in tempo to music, to do it with cautious respect of the female body (so many lifts require the male skater to support the female by her pubic bone while she holds her hands beneath his for modesty).
How modest is this sport of ice-dancing, in which both men and women wear revealing, tight-fitting costumes, where the thighs and buttocks of the female skaters flash before us in startling perfection, where the strength of the male skaters is heroic, thrillingly manly? Is ice dancing more or less modest than ballet? But modesty falls away under the spell of the stories being told, lovers in crisis, lovers in conflict, and ultimately lovers in sweet resolution. (How often the dancing pairs end their story with a kiss!)
When my daughters were young, we used to watch the famous skaters of the times: Katerina Witt, Nancy Kerrigan, Tonya Harding, Debi Thomas. So much drama was attached to their names—personal enmity, thrilling competitive moments, Tonya was charged with an attack on Nancy, and Debi, a Stanford medical student, ultimately, years later, left the sport, left medicine, lost her bearings.
My daughters and I checked out library books trying to learn the meanings of the terms triple lutz, salchow, the quad, the double-throw axel, the inside and outside edges of the blades. But never mind, we failed to learn the lingo and simply let the announcers tell us who landed what, and how good it was!
My own long-ago favorite team skaters were Barbara Underhill and Paul Martini. They had between them some magical sexuality, unmatched, unequaled by even the most famous. (See them on You Tube skating to “Unchained Melody.”) The angle of his body canting toward hers, the delicacy with which he lifted, flung and rescued her from a death spiral, and most of all the way their eyes locked in every performance, they never looked away from each other, their passion was tangible.
Barbara Underhill’s heart was later broken when one of her twin baby daughters crawled out a door of her home and drowned in her pool. She thought she must give up skating. In time, but came back on the ice, she recovered day by day till she found some degree of peace. She later created a foundation to assure the safety of children.
http://www.keepsafefoundation.com
As I see it, Underhill and Martini have never been matched since their winning days.  This past weekend, I watched a new champion with the amazing name of Gracie Gold. She danced Stravinsky’s “Firebird,” she melted the ice with her heat and beauty.
I watched her, transfixed. She spun she jumped, she twirled, she shimmered like a diamond. She landed every leap. Her smile, as she finished in triumph, was transcendent.
I watched with an almost tearful yearning. I let myself think the dreamy impossible: Once upon a time I could have done that. In fact, I used to have thighs just like hers!

I’m wondering lately about these medications that encourage us to think that in “four-to-six weeks” we may feel less grief about our losses, less confusion about our terrors, less anxiety about our inability to manage the demands of daily life, less dread about vulnerably, loneliness and death.

And then, of course, there is the sub-text of these psychotropic drugs as in the TV ads where the principal players are dancing through a meadow or a couple in a sailboat are kissing or a grandfather is throwing hoops with the kids while at the same time the voice-over is warning about suicidal ideation, kidney failure, incurable infections, heart arrhythmia or or fatal anemia.

When we find ourselves in a dead-end tunnel with no light slipping in anywhere, we may elect to try these drugs along, at times, with talk therapy.  The pills are pieces of magic as we ingest them and wait for the miracles. Alert and alarmed, we watch for the sinister side-effects like arrivals of mystery-deliveries.  Tremors of the hands.  Unbearable thirst. A throbbing of the heart in strange places, in the mouth, in the neck.  Sudden, thrilling weight gain! (We feel hunger, we feel ravenous for nourishment and joy, we are up at all hours of the night eating peanut butter sandwiches and lemon tarts.)  Are the panic attacks lessening?  Are we sleeping better?  And what about those “serious sexual side effects” that come with these drugs? Is there any way that those side effects are going to return us to a joyful life?

For days and weeks we count on the implied promise of feeling happy, or maybe just a bit happier if not ecstatic.  We look at the pills as if little genies inside them are gathering potency and soon, any moment now, they will blast forth and we will feel release, and joy, peace and love.

No miracle really happens.  No one knows if these drugs really work, no one is certain, but some think maybe they might.  Some accept that perhaps one’s terrors simply lessen with time and one is not as tuned in to cosmic unhappiness or despair as once one was.

Or we face up to the reality that we’re here, there are no deals to make, and no genies in a bottle.  We get a grip.  Or we lose our grip.  One day follows another and that is the delivery we get each day. A new day every day may feel unremarkable, but it’s all there is.  It is, in fact, everything.

While reading the obituaries last week, I came across this line:

“She died after a long ballet with cancer.”

Oh yes, I thought, cancer is more like a ballet than a battle! The dance is long and involved, with many steps, variations and rhythms. The choreography changes sometimes weekly—your dance partners (GP, oncologist, surgeon, pathologist, dosimetrist, chemo nurses) revolve around you in dizzying array. In addition there are the cancer pharmacists to whom you have access when you have doubts about your nausea drug, about how many opioids it is safe to take, what to do about the blisters in your mouth and throughout your digestive tract after chemo. Added to the dance may be the dancers in your cancer support group—other souls going through what you are now experiencing, giving encouragement, advice, holding onto you when you melt into tears. There are pauses in the dance to learn about chemo-brain, about neuropathy in your dancing toes, about whether or not you want to have nipples tattooed upon your reconstructed breasts, or where to go to get your free wig. Then there are the inevitable funerals—the memorial services for those you love who have lost the “ballet.”

Each day the obituaries are there to tell us who we have lost, how young, how hard they fought, (in some cases, how carefully they kept their cancer a secret from the public). Sometimes the stories are about calculated survival, about double mastectomies done to prevent the inevitable before a trace of cancer appears. Famous TV personalities let the cameras into their hospital rooms to trace the ordeals of bone marrow transplants and weeks of chemotherapy. Children with cancer get a boost from the “Make A Wish” foundation. But cancer surely is the shadow that haunts us all. My grandmother Fanny died of “a stone in the stomach,” and my father died at 56 from leukemia that was treated then with the most primitive of medicines, a chemical used in WW Two called “mustard gas.”

My own five year mark comes up in March. I know it is just another day, but I await it like one awaits a precious and desired signal, a signal that says “Yes, you may go on! You may go on!”

In these pages I hope to address the magnitudes and the minutiae that fall upon us all in the way that we confront sudden bits of knowledge, stumble upon realizations, and feel our way among passions, pains and troubles. I’d like to call it “This Is My Letter To The World,” taken from the Emily Dickinson poem that tells it this way:

Merrill Joan Gerber was born in Brooklyn, New York. She has published thirty books, and is an award winning novelist and short story writer. She has published stories in The New Yorker, The Atlantic, Mademoiselle, The Sewanee Review, Salmagundi, The Southwest Review, and many other journals. In 1986 Gerber won an O. Henry Prize. In 1993, she won the Ribalow Award from Hadassah Magazine for her novel, The Kingdom of Brooklyn. She currently teaches fiction writing at the California Institute of Technology.

In these pages you will find my published books: the stories, novels and memoirs whose secrets first began to speak to me when I was twelve, when my father gave me a blank printer’s dummy and inscribed it: ”To Merry, a book to enter happy and interesting events—Dad.” That year, he set up a card table in our cellar and presented me with my first typewriter. There, in the musty quiet under our house, with the fiery furnace roaring behind me, I wrote my first impressions of the nature of life.

The photos below are images from my childhood in Brooklyn, to the shores of Miami Beach during World War Two and through the years of my growing up. Ultimately, my passion for writing invited the illuminations and insights that grew with the events of each passing year. The paintings I did came as a surprise to me, in the watercolor class of the cancer support community. Everything, it has turned out, is a story. 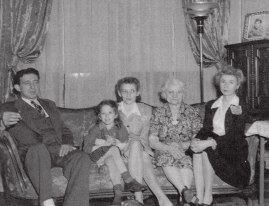 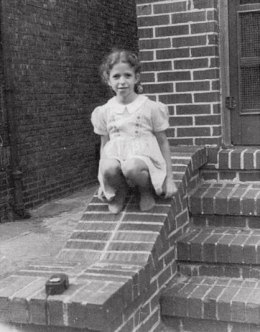 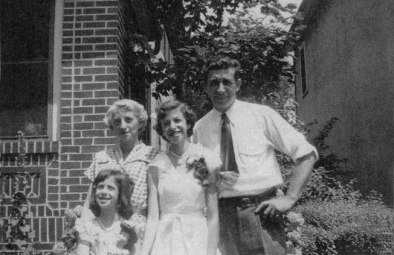 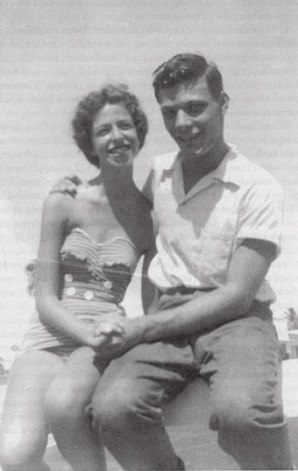 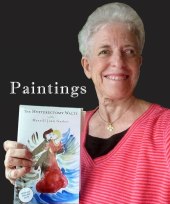 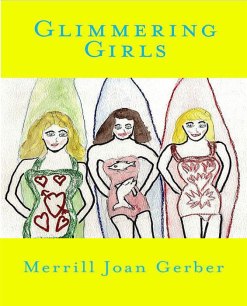 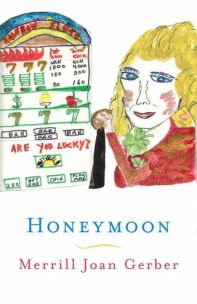 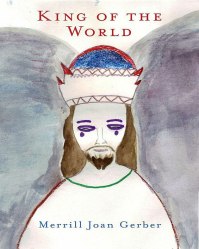